We are awakened by the sound of MOOOooooo, MOOOoooo. The cattle are not in camp but close. The only thing that needs picking up outside is the power cord and a couple of leveling blocks, inside everything is stowed for travel. We are off at 0730 hours.

We drive by several cows, one with a yearling calf. The ones closest to the gravel road seemed perturbed that we have the audacity to want to drive past them. After a little “coaxing” they relent and move farther away allowing us to pass. We drive back to highway 140, then to north US 395 to continue our journey towards Idaho. 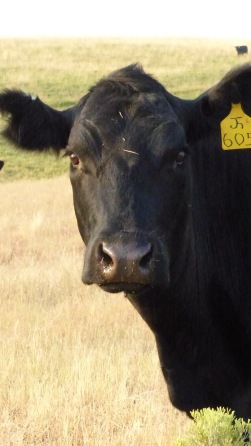 We had hoped to outrun the immense cloud of smoke being produced by multiple wildfires but that hope was dashed at the highway 31 and US 395 junction in Valley Falls. A big flashing sign with the words “Entering Active Fire Area” in bold greets us. Crap! It doesn’t specify that the road is closed nor how far up the road the fire may be. We decide to push on towards Riley and highway 20 knowing that we may have to turn back. Oh well, it’s only 95 miles to Riley. If we have to turn back we really don’t have an alternate route without going several hundred miles out of our way. What have we got to lose?

We skirt Lake Abert, a very large, very shallow alkali lake. Next comes the metropolis of Wagontire, named after local Wagontire Mountain. From 1986 to 1997 Wagontire was home to just two people, the Warners. The complex consists of a gas station, a motel, cafe, RV park, general store and of course, an airport which is on the other side of the road. When pilots land they had to taxi across US 395 to fuel up! As far as I can tell, the community is still owned by two folks. We stop at a roadside rest where we talk to a fella who has first hand knowledge of the nearby wildfire. He states that the fire doesn’t pose a problem right now, that firefighters have set up a base camp in Riley and we might run into fire companies staged along side the road. We see lots of smoke and a few areas of actively burning brush in the distance as we travel north.

Reaching Riley the firefighters base camp is clearly visible in a large pasture. It’s not a big camp, or at least not many firefighters are in camp. We turn east onto Oregon Highway 20 and travel towards Burns. The fire is behind us but more smoke lies ahead.

Firefighters Base Camp in Riley

Burns (pop. 2800) is the seat of Harney County, ninth largest county in the U.S. at 10,000 square miles. 60% of the county’s population lives in Burns and nearby Hines (1600 souls). Cattle ranching and alfalfa farming are important to this area, so are annual events like the migratory bird festival, county fair and a county music jamboree. 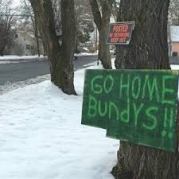 So in a little over two hours we travel the remaining 113 miles to Vale, Oregon. Much of the road follows the Malheur River which flows through gorges, canyons and valleys on it’s way to the confluence with the Snake River.

Vale, Oregon, 1900 souls, is the seat of Malhuer County. The town lies at the confluence of  the Malheur River and Bully Creek and the intersection of highways 20 and 26. The community was the first stop in Oregon on the Oregon Trail, celebrated by multiple murals painted on the town’s buildings. Farming, sales, production and product moving are its main businesses.

We will stay overnight in Vale at the Vale Trail RV Park after a travel day of 277 miles. Smoke update- still plenty of it! Ugh!