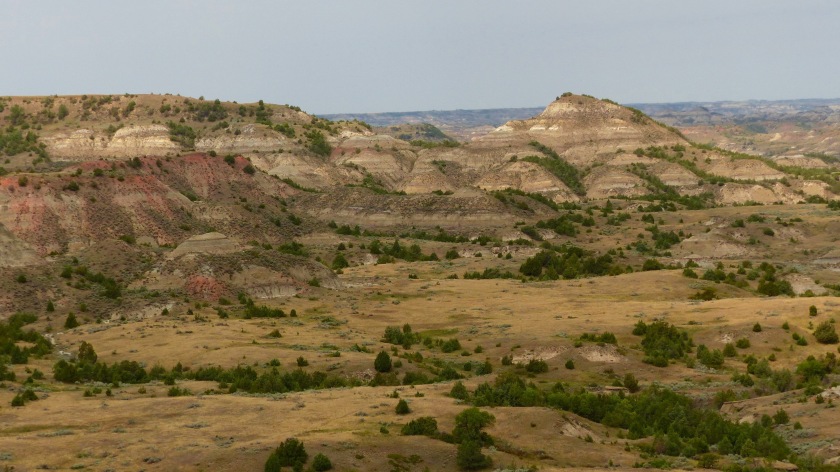 We’ve never been to North Dakota- have you? We left Miles City KOA and headed east, er west then east to I-94. Couldn’t cruise through town as a low bridge would put our 5v’er in the hurt locker. It’s just over 100 miles to the new-to-us state of North Dakota. Terrain consists of rolling grass covered  hills that sometimes turn angry- badlands angry. Of course down by the Yellowstone River green farmlands abound.

Not long after we hit the road we come to Terry, Montana. Terry (600 souls) is the seat of Prairie County. The town was named after General Alfred Terry, a commander of  an 1876 expedition in relation to General Custer’s campaign against Native Americans. One of it’s world famous events is the Terry Yippee BBQ. Never heard of it? Neither have I….. The Terry Badlands Wilderness Study Area also attracts a lot of visitors.

Glendive (pop. 4900) is another county seat, that of Dawson. It is just one of many towns established by Northern Pacific Railway. The town is an agricultural and ranching hub of eastern Montana. Makoshika State Park is located nearby. It’s a large 10,000 acre park that features badlands and fossils of the tyrannosaurus Rex. Our time following the Yellowstone River comes to an end here as the river continues northeast and we east. 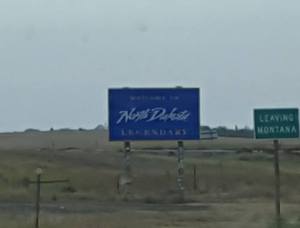 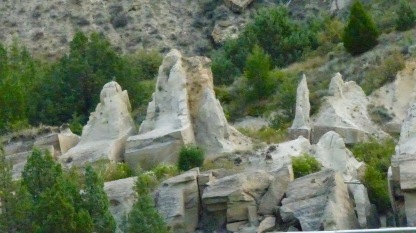 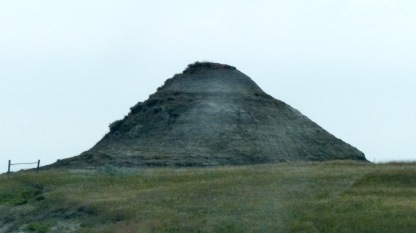 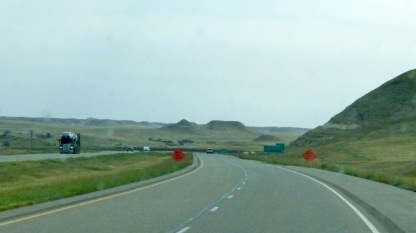 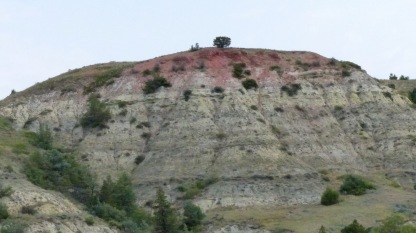 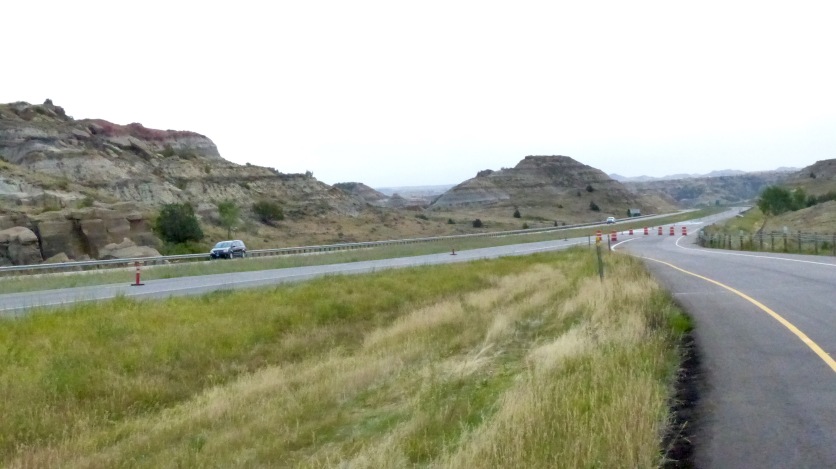 On The Road To Medora, ND

Yippee, We made it! We crest the hill and head down into more hills, more badlands. Some of the hills are severely eroded. In stark contrast others are just normal looking grass covered hills. We soon pull into Medora. 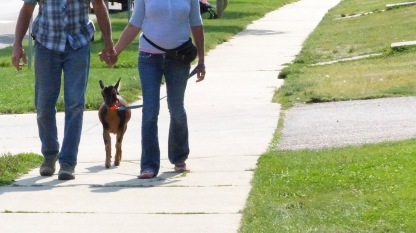 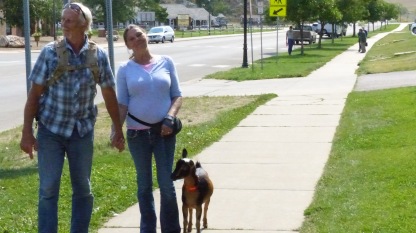 Medora had a population of 112 souls in 2010. It’s, gads, the seat of Billings County- and the only incorporated town in that county! This town was also founded by the Northern Pacific Railroad in 1883. Geez, how many towns have we been to or through that were founded by the NPR? It is known for the Medora Musical making it one of the most popular attractions in the state. President Roosevelt visited there in 1903. He felt that he had helped stop the bickering in the West as he was greeted warmly by folks far and wide. He stated that his only regret was that he couldn’t spend 3 hours visiting with the locals. 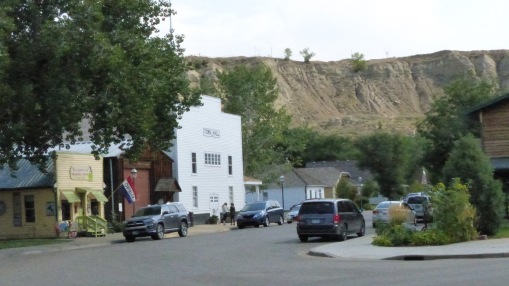 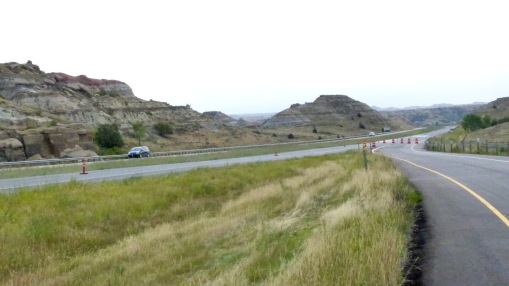 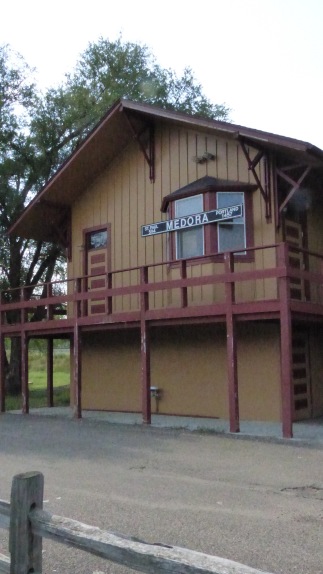 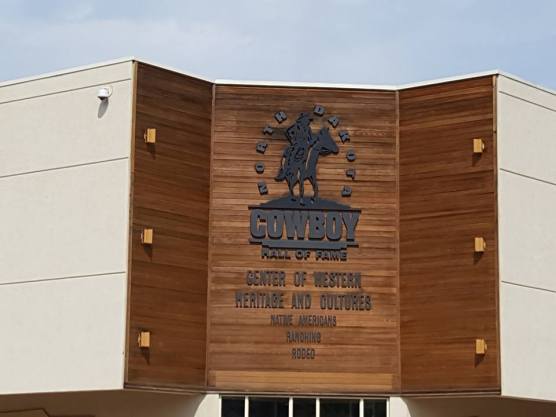 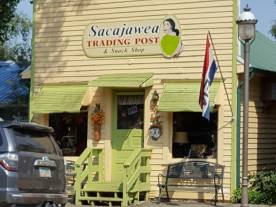 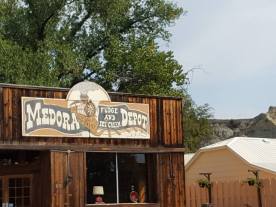 President Theodore Roosevelt visited the area in 1883 to hunt bison. He immediately fell in love with the area’s ruggedness. He eventually purchased 3 ranches around the area. The entrance to the South Unit of Theodore Roosevelt National Park is in the center of town. It offers a small, busy visitors center. The road into the park is not too good and there’s no place to drop the trailer. We bypass the people crush at the park in favor of visiting the Painted Hills overlook. 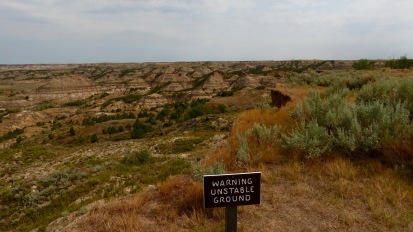 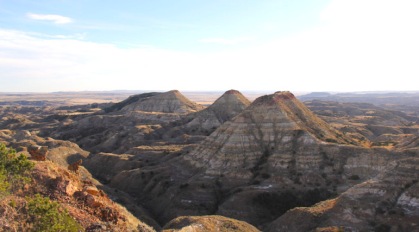 The overlook stands on an “unstable” cliff. A father had talked his teenage son into climbing the rail fence to better pose him for a photo while mom looked on. The son pointed out the sign below. Dad said “How bad can it be? They let us stand on this side of the fence don’t they?” WOW!

Off we go. We are spending a couple of nights in Dickinson, ND. Not sure what we’ll do but we are a little road weary- and the smoke from wildfires in the West has greatly diminished.