Today was the day we start heading towards a new state for us, that of Kentucky. On the way are a couple of local and historical sites to see. First of all, the dreaded navigation system on Jil’s phone struck again. Instead of routing us onto the larger highways it decided that we wanted to travel up and down and around on narrow, bumpy Amish carriage roads. While these roads are very pleasant to travel they are not pleasant when towing a 34 foot fifth wheel. We came across several horse and buggies always near the top of a grade. The horses were slowed considerably and visibility of oncoming traffic wasn’t good….. so we wait for the moment we can pass them safely. After 20-30 miles of this routing I’ve had enough and do my own routing which turns out to be on much better roads for towing. 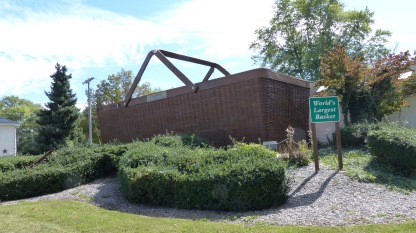 We stop in Dresden (1500 souls), home of the world’s largest basket. It’s really a building at the edge of the downtown district. Dresden has a long history dating back to 1773 when a missionary tried to convert very hostile Shawnee Indians. Later it was an important trading town on the Ohio and Erie Canal. Dresden is also the original home of the Longaberger Company, a manufacturer of hand crafted maple wood baskets. 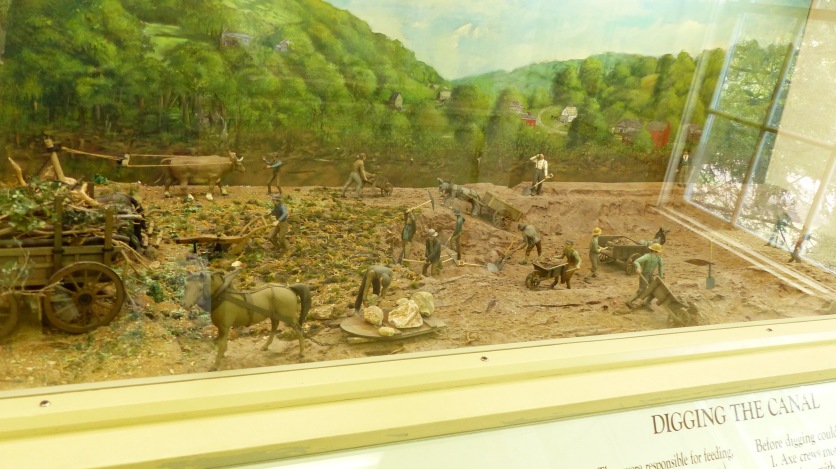 The canals were built by hand

Historic Roscoe Village is located a few miles south of Dresden in the city of Coshocton (12,000 souls). We walked to the canal boat but it wasn’t running until later so we walked back to the village. Most of the shops in the village were closed for the day- rats! Oh well, it was nice looking at the old buildings that date back to the 1820’s.

We drove through Lancaster (pop. 37,000) which, by the way, is a lovely town, on our way to the Lakeside RV Park. The park is located between two lakes but is not our favorite. Sites are a little too close together for our taste and maybe a little too rusty, er, rustic. A lot of folks with their families are living here on a temporary basis and working locally. We’ve seen quite a bit of this lately, young families living in travel trailers.

Just before sundown a bunch of fellas pull into camp in their own vehicles, get out and chew the fat for about two hours out on the street. I only mention this, not because their socializing was bothersome but to note that these families appear to have been together at this park for quite a while.

Our site right on the lake at Lakeview RV Park

Below is some history of the Ohio and Erie Canal and Historic Roscoe Village for you history buffs:

As early as 1787, George Washington and Thomas Jefferson had discussed the desirability of a canal linking Lake Erie to the Ohio River as part of a national system of canals. In January 1822, the Ohio Legislature passed acts to fund the canal system. Since canals must generally follow river valleys, it was difficult to design a suitable system. Specifically, the bridging of the Scioto and Miami river valleys required raising the canal to such an elevation that water from neither river could be used as a source. As a result, the canal was divided into two sections.

On July 4, 1825, ground was broken for the canal at Licking Summit near Newark, Ohio. The canals were specified to have a minimum width of 40 feet (12 m) at the top, 26 feet (8 m) at the bottom, and a depth of 4 feet (1.2 m) feet minimum. These limits were often exceeded, and indeed it was cheaper to do so in most cases. For example, it might be cheaper to build one embankment and then let the water fill all the way to a hillside parallel, perhaps hundreds of feet away, rather than build two embankments. Where it made economic sense to do so, such as lock widths or portions of the canal through narrow rock or across aqueducts, the minimum widths were adhered to.

Workers were initially paid $0.30 per day and offered a jigger of whiskey. As work progressed, and where labor was in shortage, workers could make as much as $15 per month. Working on the canal was appealing and attracted many farmers from their land.

After the maximum of the 1850s and a cessation of revenue due to the Civil War during the early 1860s the canal’s expenditures started to outgrow its revenues due to increasing maintenance costs. By 1911, most of the southern portion of the canal had been abandoned. On March 23, 1913, after a winter of record snowfall, storms dumped an abnormally heavy amount of rain on the state, causing extensive flooding. This caused the reservoirs to spill over into the canals, destroying aqueducts, washing out banks, and devastating most of the locks. In Akron, Lock 1 was dynamited to allow backed up floodwater to flow.

Roscoe Village is located in Coshocton, Ohio, United States, is a restored Ohio and Erie Canal town. Roscoe Village was laid out in 1816, Roscoe was originally named Caldersburgh after its founder James Calder. After going bankrupt, the Coshocton merchant moved across the Muskingum River to some land he had somehow managed to retain. Setting up a store and naming the place after himself, Calder reasoned that the rural farmers would much rather do business in Caldersburgh than pay the twenty-five cents for the ferry over to Coshocton.

The transformation of Roscoe from a small, sleepy community into a thriving port along the Ohio and Erie Canal came with the arrival of the canal and the landing of the first canal boat, the Monticello, on August 21, 1830. The Ohio and Erie Canal, which provided cheap transportation for people and goods, granted great economic development for communities along the waterway. With its status as the fourth largest wheat port on the canal, Roscoe’s prosperity ignited a chain of businesses in the area, including a blacksmith, a cooperage, a hotel, a mill, and several stores. State Route 16, which runs parallel to Roscoe today, is the location of the original Ohio and Erie Canal bed. The canal continued to operate until the Great Flood of 1913 and the coming of the railroad after which the once thriving canal port quickly declined.