Stevenson Washington (2400 souls) is the Seat of Skamania County. We do most of our grocery shopping there as well as attend Mass on Sundays. Stevenson has a lot more to offer than Cascade Locks and is only 3 miles farther. The local A&J grocery store is pretty well stocked and the town has few nice restaurants, a pharmacy, a hardware store and an auto parts store. Stevenson is also a port of call for the river tour boats which have the appearance of the old Mississippi stern wheelers. At seven miles distance, Stevenson is a lot closer than traveling 20 miles either way to Hood River or the Gresham/Troutdale/Portland area for basic supplies. Besides, the view from The Bridge of the Gods looking up and down river is outstanding!

We took a trip on the Stevenson side of the Gorge east to White Salmon (2400 souls), again to escape the rain. The rain followed us! WA 14 is also known as the Lewis And Clark Highway as The Corps of Discovery used the Columbia River Gorge to reach the Pacific Ocean in 1805.

Washington Highway 14 runs between Vancouver, WA and Plymouth to the east. In places it is a hilly, twisty two lane road. As one travels farther east the road flattens out and parallels railroad tracks. I think one of the highlights of this section of road are the tunnels. There are seven in all and we go through six. RV’ers who haven’t traveled the 14 are concerned with low clearances but shouldn’t be. Semi’s go through them all the time. The tunnels are arched so the low point is at the vertical wall which most rig drivers would avoid anyhow. An RV’er is always wise to know exactly how tall their rig is as there are many places around the country that have restricted heights.

We stopped at the Spring Creek National Fish Hatchery just west of White Salmon. Of course, it’s raining……….. Jil goes into the office and starts chatting with the nice Fish Gal behind the counter……. and its raining……… and I’m outside with our mutzos……… and Jil’s still chatting. I find a post on which to secure the furry ones leashes and head in. Jil’s still yackin’, er, conversing with the Fish Gal so I run into the Little Boys Room. When I come out she is still, ehem……. conversing. I break into the conversation and say “Sweetie, it’s raining outside and the doggies are getting really wet. You know how much you dislike the smell of wet dogs………..” and I walk outside to stay with the furry ones. After what seemed like a week Jil comes out and we walk through the hatchery to the car and climb aboard. Ewwww, it smells like wet dog in here! Sigh………. 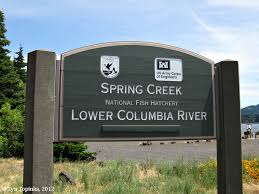 We also did a quick spin around White Salmon enjoying the fantastic views that this cliff-side town has to offer. Couldn’t see as much today for the clouds. The mutzos needed a stretch so we went to the park. On a clear day Mt. Hood can be seen from that location.

Heck, on a clear day Mt. Hood can be seen from almost anywhere in the downtown area as this town sits well over 400 feet above the river- on the edge of a basalt cliff. We believe that the grocery store in town has the most complete inventory of any small town that we’ve visited. It has everything one could possibly need plus a deli and a coffee bar. 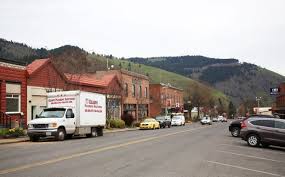 On the way back home we stopped at another Federal hatchery- Little White Salmon. It’s located at the confluence of the Little White Salmon River and Drano Lake. This hatchery is much smaller than Spring Creek but it sure is surrounded by a lot more beauty.

There’s been enough rain that the Boss didn’t want to mow for fear of sinking his big commercial mower up to its hubs in mud. Enough rain that the planter boxes didn’t need watering. Enough water to limit the amount of visitors to the hatchery which is unusual as they are accustomed to wet weather. After all, we are in U. of Oregon Duck and Oregon State Beaver country.

But the some of the ones who did visit ask questions us hosts have heard many times before. What is there to see here? Duuhhh- fish maybe? Where can we see the big sturgeon? Can you see that big 4′ by 8′ map displayed directly behind me? Well, it has a location marked “You are Here”. The map is self explanatory in that just to the left of our location is an area marked “Sturgeon Viewing Center. It’s also emblazoned in big white block letters with a directional arrow just below the map, Sir. Ohhhh. 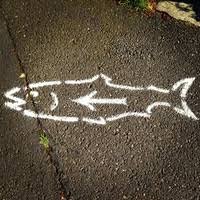 Well, how do I  get there? OK, the map also indicates that if you follow the fish painted on the walk, like the one you are standing on, it will lead you to the Sturgeon Display. Oh…….. So once the salmon are spawned do you release them? No sir, they are euthanized in order to spawn the fish. SHOCK! (grabs chest as if having a heart attack) HOW HORRIBLE! No sir, the fish’s life cycle is over when they spawn in a natural setting. Euthanizing them is a lot more humane than them lying is shallow water slowly dying while a great blue heron is tearing meat from their body. Jeez……..

So this week at the hatchery has been almost like every other in that the rain kinda slows down the progress on the special projects list. We did get a few projects completed which I enumerated in the last post. We’ve mostly just kept the ball rolling in between rainy episodes. I did help our Boss Hugh eliminate a water leak in an unused RV utility pedestal located near our own. Couldn’t fix it with the parts on hand so we plugged the pipe. I also repaired a water leak at our own pedestal. An inline water shut off valve had cracked, no doubt from freeze damage caused last winter, was replaced. Jim and our boss Hugh managed to get the Japanese Maple tree out of its old planter with a fork lift and into the new one that Jim made.

More rain in the forecast. We’ll see how much more of the wet stuff we receive compared to the predictions.