Yesterday we traveled 115 miles to Buffalo River State Park. We are now in our second new to us state- Minnesota. As we cruised east the hills got a little smaller and the northern plains became more evident. Again we see large fields of crops, a checkerboard of corn, sunflowers, maybe some wheat and alfalfa. We travel quite a distance without seeing cows, then spot one that had gotten past the barbed wire fencing and was laying on the side of the road. We are used to seeing raccoons, deer, even porcupines and armadillos in the South but hardly ever cows.

As the terrain flattens out more water is evident. Hobart Lake is in the path of the interstate so the interstate goes through it. Many of the towns along our path are several miles away, too far away to visit. Valley City (6800 souls) is one of the larger cities located near the interstate and is the seat of Barnes County. It’s known as the City of Bridges due to the numerous bridges crossing the Sheyenne River. One of particular interest is the Hi-Line Bridge. When built in 1906 it was the longest railroad bridge for its height in the world at 3860′ long and 162′ above the river. The bridge is in use today.

Tower City is named for Charlemagne Tower, a railroad official. 250 folks live there, surrounded by large farms and ranches. We pass Casselton and arrive on the outskirts of Fargo. Buffalo State Park, named for the Buffalo that wintered here, is located on Highway 10 across the Red River approximately 15 miles east of Fargo in the state of Minnesota. It’s a very nice park with mowed grass in between sites, a large swimming pond, many nature trails and of course, the Buffalo River. This makes three great campgrounds in a row that offer more than a place to lay our weary heads for the night. 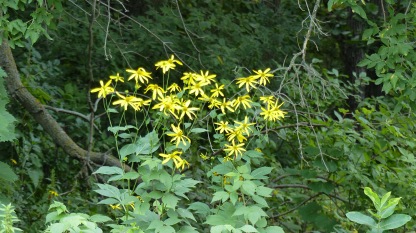 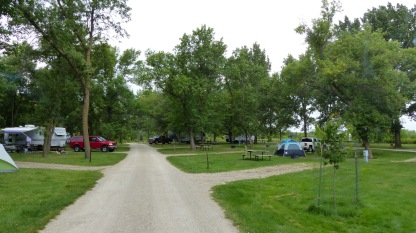 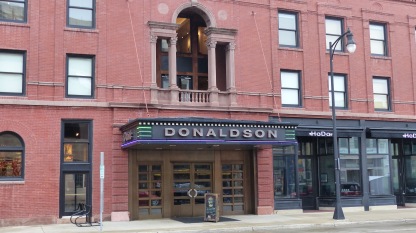 Today we head back into visit Fargo. The city is the most populous in the state at 121,000 souls. Downtown is turn of the 20th century brick with newer structures to its south. She is also the seat of Cass County. Nearby towns are West Fargo, Moorhead and Dilworth Minnesota. North Dakota State calls Fargo home. She is named after Northern Pacific Railway Director and Wells Fargo Company founder William Fargo. The area started to flourish after the arrive of the railroad and became known as “The Gateway to the West”. 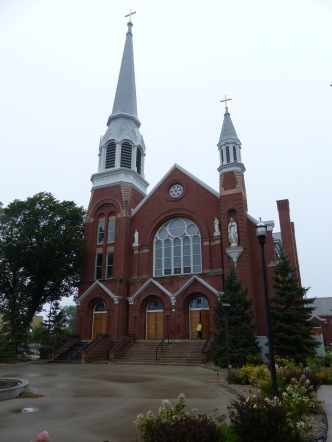 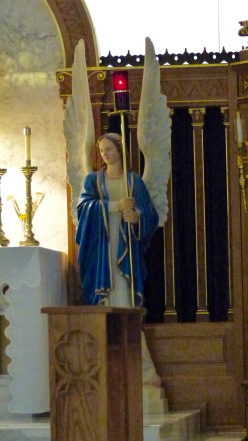 Does anyone remember the movie Fargo? It’s described as a black comedy crime film that starred Frances Dormant as a pregnant police chief and William Macy as the desperate car salesman. Macy hires two guys to kidnap his wife in order to extort a healthy ransom from his father in law. It’s a very complicated story that begins in Minneapolis and doesn’t end until a lot of bad guys commit heinous crimes against innocent and not so innocent folks. Remember the wood chipper scene?……

THE Wood Chipper from the Movie Fargo

On the way back to camp we stop at the Hjemskomst (don’t ask me how to pronounce that!) Heritage Center. We didn’t go inside choosing instead to walk the grassy grounds. Behind the main building is the replica of the Hopperstad Stave Church located in Norway. 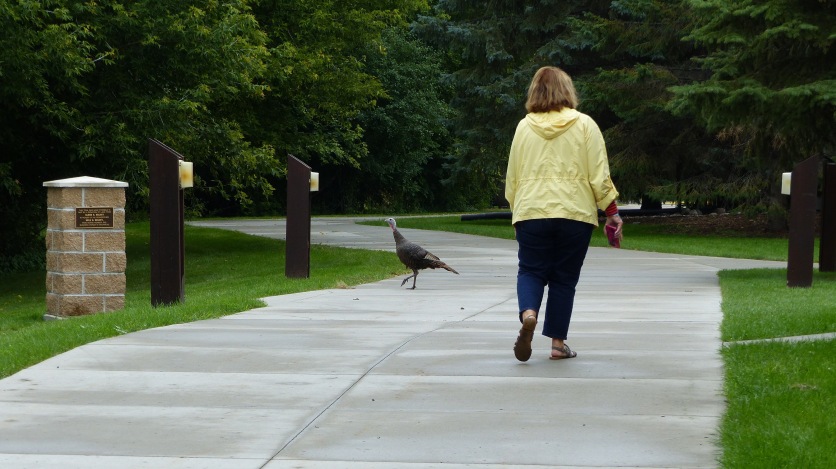 There’s a turkey lurking’ in front of ya Jil!

Weather here has been cool with a touch of rainy mist from clouds that hug the ground like fog. No blue skies today. Still, it’s been a great place to visit. We’ve met some nice locals, at least they are more local than ourselves. The cool weather has made our numerous walks through native bottomlands along the Buffalo River a real treat. Together with the adjacent Bluestem Prairie Scientific and Natural Area it protects one of the largest and highest quality prairie remnants in Minnesota. There’s lots of wild critters- 200 species in all from moose to plains pocket mice as well as hundreds of bird species.

Tomorrow we’ll travel to the headwaters of the mighty Mississippi- Itasca State Park.