Travel day #27 was indeed a travel day. We left Pokegama COE campground at 0800 hours. The night before I’d Google Mapped our route- US hwy 2  through Grand Rapids to  state hwy 169 to Higgins. Then travel a few other county roads that eventually spit us out at Silver Bay on the north shore of Lake Superior. Easy peasy. I put our destination in the truck’s onboard navigator fully expecting it to agree with Google Maps route. Wrongo cowboy! So rather than screw around trying to reroute the onboard navigator we submit to her commands and stay on US 2. This route is 23 miles longer and takes us through Duluth.

There are not many towns on this route. We travel a while and attempt to pull into a poorly marked rest stop, overshooting the entrance. We turn around, enter the rest stop and park. We are in the metropolis of Floodwood (520 souls). Before the town was established back in the fur trading days of the late 1600’s and 1700’s the Savannah Portage was major transportation route to access the fur rich upper Mississippi Valley. In the late 1800’s Floodwood was established as a townsite and lumber became a big business. The logging industry died out in the 1920’s so dairy farming took over. Today many in the workforce travel either to Duluth or Grand Rapids for employment. Some work in the local peat bogs and some still have dairy farms. The town is surrounded by the East Savannah, Floodwood, and St. Louis Rivers.

There may have been a few more villages on the way to Duluth but we sure didn’t see them. As we merge onto I-35 north we get our first look at Lake Superior, Then drive through the industrial section of Duluth, then downtown and merge onto highway 61. We continue through one of the most beautiful and obviously affluent lakeside neighborhoods, then more rural countryside. 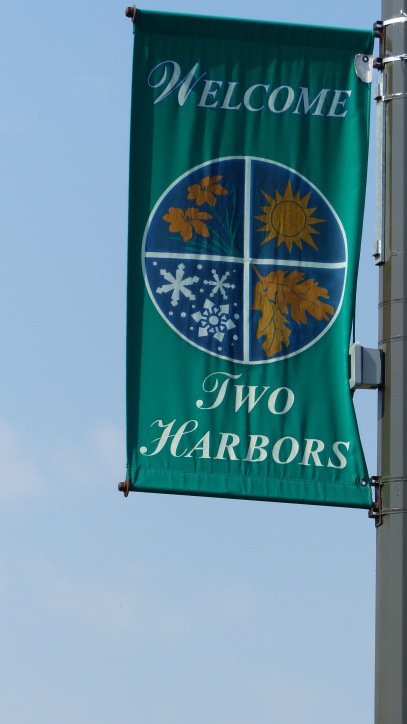 The only community of size thus far on the North Shore is Two Harbors (3700 souls), the seat of Lake County.

The town has Gooseberry Falls State Park, Tettegouche State Park and the Split Rock Lighthouse State Park within a half hour’s driving distance. We stop at Gooseberry Falls to admire this wonder of nature. We pass a little place named Castle Danger and several bays named Silver and Beaver, and two more state parks. We arrive at Grand Marais Campground around 1400 hours and settle in. A little later we head a short ways into town and do some snooping and shopping.

Travel Day 28 is an exploration day. Lake Superior is a cold (40 degrees), clear, 1330′ deep lake. It holds more water than all the other four Great Lakes combined. She is 380 miles long at her longest point and 180 miles wide. What is impressive is looking out over the lake at the horizon, seeing not a thing but water, with the curvature of the earth readily visible- like standing on the beach look out over the Pacific Ocean. Man, she’s a beeg one! You betcha!

Let’s head up to Grand Portage. Grand Portage is located at the point where a major canoe fur trade route left the Great Lakes. It was so named because of a huge 9 mile portage where canoes and equipment are carried overland. The French, then the British established trade with the Native Americans. The fur trade wained in the early 1800’s as the British withdrew to Canada.

On the way we stop at Judge C.R. Magney state park to walk a trail then continue to Grand Portage (565 souls). It lies entirely within the Grand Portage Indian Reservation. The Ojibwe a.k.a the Chippewa people have the Grand Portage Lodge and Casino with attached RV park, a fueling station/mini mart as sources of income. The Grand Portage National Monument helps draw in tourists. 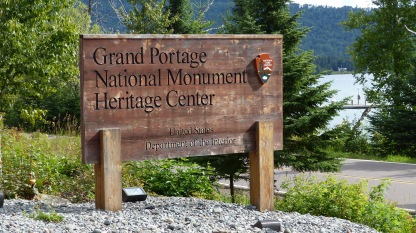 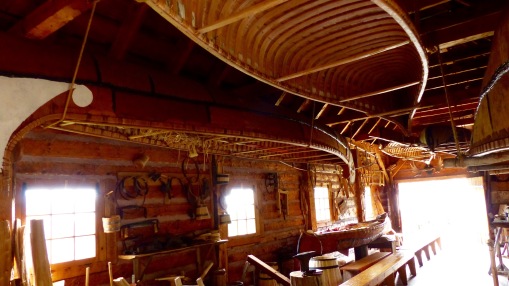 We visit the national monument where volunteers dressed in period garb offer insight into the life of the traders, trappers and Indians who met here 200 years ago. During periods of heavy trading in the summer, this place could have as many as 1500 folks gathered. The Indians liked that as they had goods to trade and made much wampum feeding everyone.

On the way back to camp we stop at the Naniboujou Lodge and Restaurant for a bit of lunch. The Lodge in incredible. Originally conceived in 1927 as an exclusive members only club located on 3500 acres of land. It was to include a golf course, a 150 room lodge, tennis courts and a bath house. The cost was to between $350k and $500k. That’s a lot of money for 1927! The prestigious charger members included former world boxing champion Jack Dempsey, the infamous pro baseball player Babe Ruth and Ring Lardner, a New York newspaper man. The original clubhouse included 24 sleeping rooms, a 20′ high stone fireplace that weighs 200 tons, and the wondrously painted 30’x80′ main room. It’s painted in Cree Indian symbols over the 20′ high domed ceiling that resembles a canoe. The stock market crash of 1929 pretty much ended the dream. The lodge ownership passed to hotel chains to private parties, the current being the Ramsey’s who live on site. It is quite amazing that this place has been preserved as well as it has. In fact, the main room, now dining room has the original paint, never having been repainted. And it looks as good as it did 88 years ago!. By the by- our lunch was delicious. Jil had a wonderful mixed green salad with grilled chicken. I had the catch of the day- white fish with a side of delicious cole slaw. A shout out to my friend Shirley who stated that the white fish meals in this area are the best- and she is right! 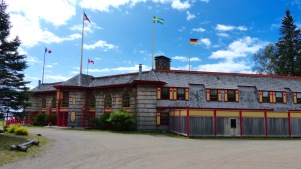 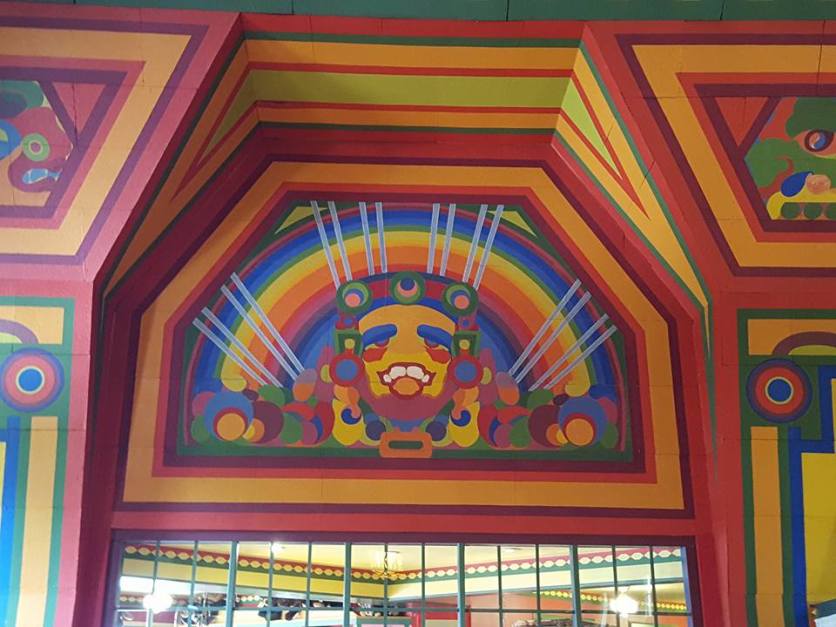 We got back to our campground. We relaxed, then Megan went for her first swim in the harbor. Tomorrow we’ll head out to Arrowhead RV Resort in Ely, MN.

2 thoughts on “She takes a Dunk in Lake Superior”