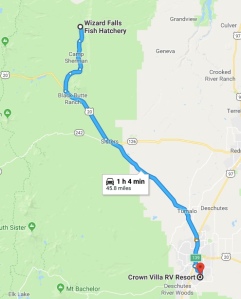 Smoke update: It’s still bad. Today is supposed to be the worst. Wind direction is blowing smoke down from British Columbia. Some genius in Spokane is rallying 100,000 people to  purchase 5 box fans each. According to plan, they will all be turned on the morning of the 24th. The fella who engineered the plan figures all that fan power will blow the smoke back into Canada. A meteorologist who was apprised of the plan stated that he didn’t think it would work….but……if it did it would draw smoke up from Kali-fornia…….

So we’re off to see the Wizard, the wonderful Wizard of……… the Metoleus River, a.k.a. Wizard Falls Fish Hatchery. We head north on Highway 97 to Highway 20 and head northeast. The first fifteen miles is through dry horse country. A smattering of bovine, goats and alpacas also call this country home.

We pass the Cascade Peaks vista point not only not seeing the peaks nor any portion of the mountains for the smoke. Round trip is over 90 miles- and we must pass through the sphincter of Highway 20, Sisters, once again. Fortunately we leave early and drive slowly through Sisters before most of the stores have opened- no crowds!

We also wanted to visit Camp Sherman since we have to drive right through the little burg. So we continue to climb up the mountain which is now covered in ponderosa pine and douglas fir trees. We pass the Black Butte Resort and turn right towards Camp Sherman. 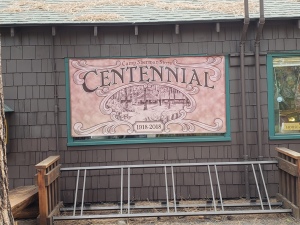 Camp Sherman is interesting. It’s very small with a year round population of a few hundred. The community includes an elementary school, a post office and a general store and a couple of small restaurants. The draw for many is not only the beauty and serenity of this place but the fishing. In fact, the general store has a huge section dedicated to fly fishing as only that type of fishing is allowed on the Upper Metolius River. This quaint settlement can swell to several thousand during the high season. Several rustic resorts along the banks of the river make for a memorable stay. There are also a couple of RV parks near the river. 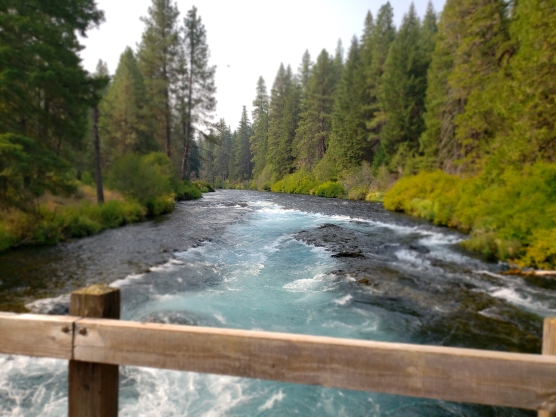 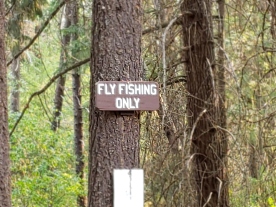 About five miles downstream is the Wizard Falls Fish Hatchery. Wizard Spring is just a short ways up river and empties into the Metoleus. It is said that the water temperature is a constant 48 degrees year round, ideal for raising fish. 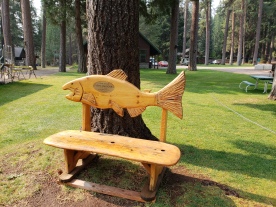 The hatchery is small compared to that of Bonneville. Due to its somewhat remote location I’m sure the visitor count doesn’t compare to the one million people that visit Bonneville. Today there are six visitors including us.  Wizard Falls is wonderful in that it’s rustic, remote and very quiet. Trout and Chinook salmon are currently raised here. A few fish have escaped the hatchery and now dwell in the settling pond…….. and a few of them are lunkers!

We head back following the Metolius. We have one more stop- the Headwaters of the Metolius. Surprisingly, the river begins at Metolius Springs- water comes out the north side of Black Butte. One looks at these little springs, the side of the mountain it originates from and figure there’s not enough water coming out of that spring to create that decent sized river. They say that the source of the springs is in the Black Butte Ranch area located south of Black Butte.

We retrace our steps and are now home. One thing that’s been on our minds is the reported abuse of children by priests in several Pennsyvania Catholic Dioceses. Here is a headline that I snipped from the new media:

Wall Street Journal: “Roman Catholic Church officials in Pennsylvania systematically covered up the molestation of more than 1,000 children by more than 300 priests over the past 70 years, according to a report released Tuesday on one of the most exhaustive investigations into the church’s sex-abuse scandal.”

That said, we attended St. Paul Catholic Church Mass in Silverton last Sunday. We both feel that this was in the top 10 Masses that we have ever attended. The choir sang beautifully, and the priests were very reverend and humble. If we lived in this area we would definitely attend Mass here.

Two priests, both of St. Paul’s are presiding. Two presiding is unusual, which usually means somethings up. The Mass in every Catholic Church is almost identical and is steeped in tradition. Part way through the Mass, after the Readings from the Bible and the Gospel of the Lord a homily is given, either by a priest or a deacon of the Church.

In this case, the younger of the two priests gives the homily. It is obviously coming deep from within his heart and not a written statement from the Archdioceses. He explains how the new news of abuse within the Church is so troubling even though it occurred so many miles away. He asks that his parishioners pray for the victims. He explains that although the Church is broken it is still the Lord’s House and will be repaired. He is truly shaken. The older priest has recently requested and has been granted the opportunity to serve in Venezuela. He speaks before Mass is dismissed. As he speaks, his voice breaks. He pauses and tears well in his eyes, with great difficulty continues on with his feeling of sadness, he prays that all the wrongs will be dealt with righteously.

Priests know that they hold the deep power of trust and respect of their parishioners. If they didn’t they are not effectively doing what God has called them to do- shepherd his flock. The young priests of St. Paul’s have shown that they have a profound respect for their flock and Jesus. That is good. God Bless this little parish.

People of authority, of public trust, must acknowledge that power does not entitle one to abuse another, no matter what type of abuse. If they do abuse their authority they must be held accountable.