Warning: this is a long post. Heck, it took me seven days to write it! Feel free to digest it over several days………..

The Wildhorse Casino Resort RV Park, Mission OR is somewhat of a disappointment. The sites are relatively narrow, the grass between parking pads is browned out at about 25 percent of the sites. Some site pads are asphalt and some are gravel. No shade to be had except around the perimeter of the park. Howsomeever, the perimeter, the part that the general public sees is well watered and landscaped. The RV park does have a dedicated swimming pool. Aaannnd, the price is really steep for those who don’t have a casino club card. I don’t have one of those so our rate was a whopping $76 including tax for a one night stay. $35 or $40 would be more appropriate. Native Americans 1, White Eyes 0.

Travel today will be pleasant as our route is Interstate 84 all the way to Bonneville Fish Hatchery. Breaking camp is easy- we are only using the power cord. The dogs have been walked, everything is stowed inside, slides in, jacks up, we are ready to roll. 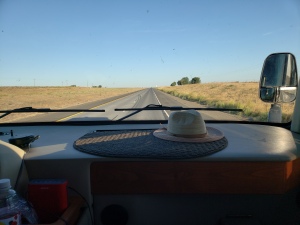 This portion of Oregon is composed of rolling hills, dry rolling hills that remind us of Washington’s Palouse. Wheat and bean country. It can get pretty warm out here. The town of Pendleton (15,000 townsfolk + 1600 correctional inmates) is known for its Pendleton Woolen Mills and the Pendleton Roundup sits down in a holler to our north. Located just east of I-84 is the city of Hermiston (17,000 souls), the largest city in eastern Oregon. It has become a logistics hub due to its proximity to I-84 and I-86. If one were to pass Hermiston heading north on I-86  one would drive right through the Tri-Cities of Kennewick, Pasco, Richland and West Richland, Washington.

I count four cities in the Tri-Cities. Why not Quad Cities? Tri-Cities (283,000 souls) is a large metropolitan area located at the confluence of the Snake, Columbia, and Yakima Rivers. Prior to the end of the Cold War the economy was based on the manufacture of nuclear weapons at the Hanford Site. Locals got jittery when the Cold War ended fearing the Tri-Cities would quickly become a ghost town. They should have feared not as the facility’s purpose was switched from the creation of nuclear weapons to the effective sealing and disposal of radioactive waste. During the 1990’s several major corporations entered the Tri-Cities which helped diversify the economy. Despite the economic recession the Tri-Cities continued to maintain steady growth.

Our first stop is at Boardman, OR. The town has a population of 3200, 3100 of which were  in hiding when we arrived. It is named after Samuel Boardman who homesteaded there in 1903. He went on to become the first superintendent of the Oregon State Parks System. The town lies on the southern bank of the Columbia River. Oregon’s second largest port, the Port of Morrow is adjacent to Boardman. We like to stop there because it offers a large, well maintained marina, RV park and day use area right on the Columbia. It’s a beautiful, quiet morning at a great place to stretch and walk the mutzos. 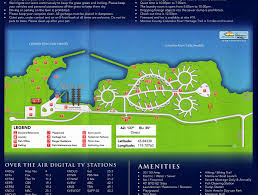 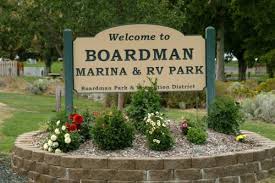 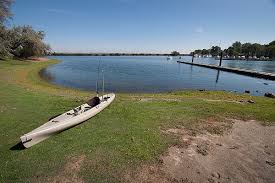 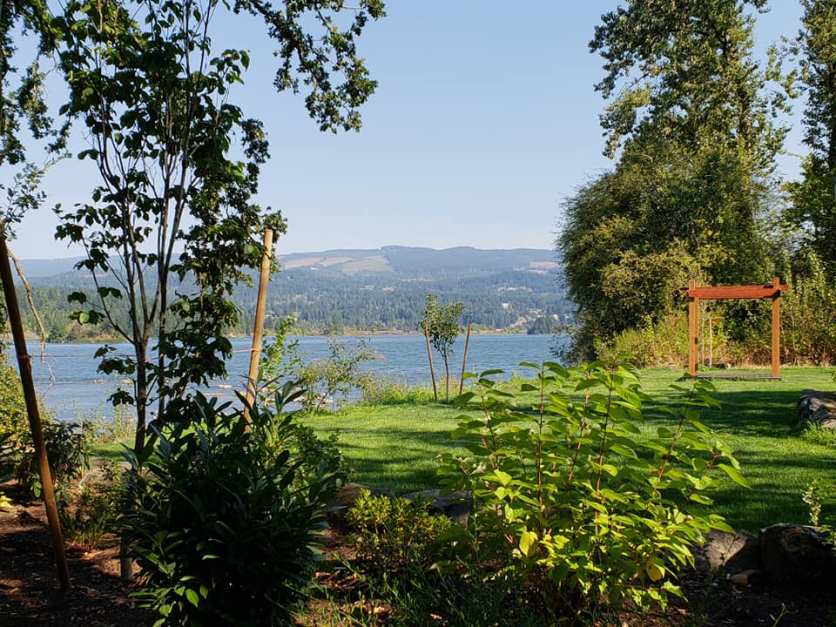 We fuel Big Red and head off westbound on I-84. The fuel gauge continues to read incorrectly but now I feel that it reads about 15% or approximately 16 gallons less than is indicated. Everything is going along just swimmingly until……….. the BIG WIND comes up. We had wind yesterday but not BIG WIND. The wind is blowing over the port rail and is so strong that it feels like I’m at the helm of a sailboat thats heeling– when the wind pushes the sailboat causing it to lean over the water. The  obvious course of action is to slow down. That helps a lot but I still have to fight the strong gusts.

The eastern end of the Columbia Gorge is much dryer and the walls forming the gorge are not as spectacular as say, from The Dalles to its mouth near Troutdale. The basalt rock walls grow higher and steeper as the gorge narrows. For the most part the walls on the southern, or Oregon side are much more vertical and closer to the river than those across the river in Washington. Most of the settlements are either located at the confluence of a smaller river and the Columbia or a road coming from the south. Not many bridges cross the Columbia. Due to the more gentle slope on the northern bank more settlements exist in Washington State.

We pass a few small settlements. Arlington lies at the intersection of I-85 and Oregon 19. Le Page Park, a Corp of Engineers administered facility, is at the confluence of the John Day River and the Columbia. To the west is Rufus (pop. 249) where the average income is below the poverty line.

Biggs Junction consists of a fueling station and a restaurant. Biggs (22 souls) would not exist today if it weren’t for the junction of Interstate 84 and US Highway 97 which crosses the Columbia via the Sam Hill Memorial Bridge. In the days of the Oregon Trail Biggs is near the location where the pioneers would first see the Columbia River. Across the river is the Maryhill Museum of Art (http://www.maryhillmuseum.org) which has quite a history and is definitely out of place here in the middle of nowhere.

Twenty miles to the west and reached by traveling past the base of high, nearly vertical cliffs is The Dalles. Pronunciation is unlike Dalles, TX. It is pronounced The Dals. The wind hasn’t subsided and the steep cliffs which are in close proximity seem to enhance its intensity. Hang on there cowboy! The entire Columbia Gorge is Lewis and Clark country.

The Dalles (pop. 13,300) is the largest city along the Columbia outside of the Portland Metro area and is another place of historical significance. It was a major Native American Trading Center for at least 10,000 years. Lewis and Clark camped here in 1805 and fur traders plied their trade here. The Dalles was also the largest and longest of the four great portages where fur trading boats had to unload and transship their cargoes. The Dalles Dam submerged the Long Narrows and Celilo Falls. Another bridge across the Columbia exists here.

We pass Mosier (433 souls) as the Gorge widens some. When the Columbia River Highway was built in 1921, it was necessary to build a pair of tunnels through a high rock point. These tunnels and nearby cliffs were troublesome as numerous rockfalls and accidents happened all to frequently. A new road was completed in 1954 near water level and the tunnels were abandoned.

Mosier Tunnel, Rock Inscribed by Snowbound Who Took Shelter in the

They were soon filled with rock rubble and forgotten. The west portal was completely buried in fallen rock and trees were growing out of the roadway. In 1995 work was begun to reopen the tunnels for tourist use. Roads were rebuilt and rubble removed. In 2000, the old highway reopened as the Historic Columbia River Highway State Trail. This portion of the trail runs 14 miles  round trip from Hood River to the Mosier Twin Tunnels. 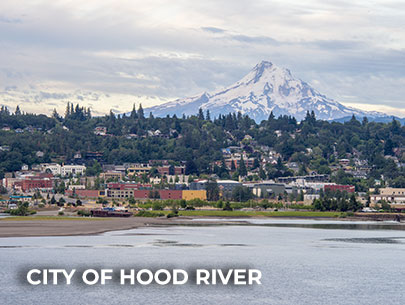 Heading west there is a noticeable change in scenery. A rapid transition from gold hills to green cliffs occurs, an indication that this portion of the Gorge receives a lot more moisture. The next town we come to is located at the confluence of the Columbia and the Hood River, the City of Hood River . This picturesque city of 7600 souls lies on a hillside overlooking the Columbia. The steel Bridge of the Gods connects the city with White Salmon, Washington. South of town is the Hood River Valley which is famous for its production of apples, pears and cherries. The valley is also home to the infamous “Fruit Loop”, a route that takes one to various growers, businesses and fruit stands around the valley. It’s quite fun to visit when all of the stands are open for business. A must see is the Western Aeroplane & Automotive Museum (Western Antique Aeroplane & Automobile Museum) which has a very large collection of antique planes and autos- all of which are in operating condition and all are still flown or driven as the case may be.

The last town on our sojourn and the one closest to our destination is Cascade Locks (1400 souls). The town took its name from a set of locks built to improve navigation past the Cascade Rapids. The locks were completed in 1896. The locks were subsequently partially submerged in 1938, replaced by the Bonneville Lock and Dam. 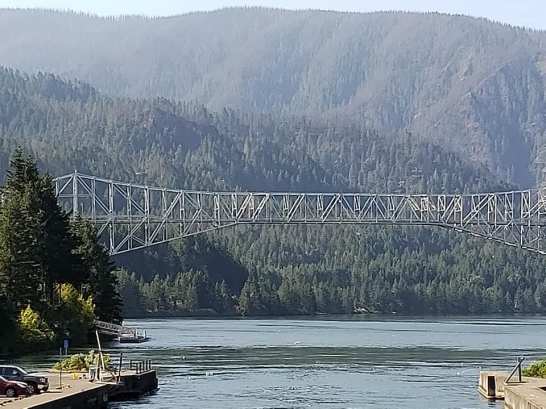 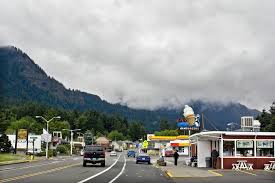 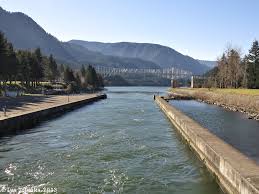 No land was lost from the expansion of Bonneville Lake behind the dam some 4 miles downstream from the city. The Bridge of the Gods (Bridge of the Gods) is located here and is the only bridge crossing the Columbia between Portland and Hood River, a distance of 62 miles. Cascade Locks is frequented by hikers along the Pacific Crest Trail in order to cross the Columbia. It is the lowest in elevation and the largest city on the Pacific Crest Trail.

Okie Dokes: Four miles west of Cascade Locks is our destination. We pass closely by Bonneville Lake, then the Dam. We make the turn off down to the dam access road. Instead of turning right at the fork we turn left, drive through the hatchery parking lot, past the salmon rearing ponds and the visitors center. Near the railroad trestle we turn right down our long gravel driveway, get the coach turned around so that our door faces Tanner Creek and the grassy area in between and ptssssh, set the air brake, level the rig with the hydraulic jacks, extend the slide rooms, hook up the utilities. We are glad that drive is over. Heavy winds made us weary even though we traveled less than 200 miles.

We settle in for two months.