Our volunteer job at Bonneville Fish Hatchery started on September 1st, the beginning of the very busy Labor Day weekend. The beautiful grounds includes a picnic area, interesting displays, the ever popular sturgeon pond, Herman The Sturgeon’s Pond, two trout ponds one of which displays rainbow trout weighing over 10 pounds. The hatchery rears over 10,000,000 chinook and coho salmon annually. Access to the hatchery is easy on/ easy off I-84 and people take advantage to use the hatchery and adjacent Bonneville Dam Visitors Center as a glorified rest stop. The hatchery can have more than a million annual visitors that includes bus loads of tourists and school students.

Ironically, on this very busy three, maybe four day weekend there is only one employee on duty with one in the back up seat, just like every other weekend.. Aaannnd, that employee is working salmon, i.e. feeding fingerlings in the rearing ponds and removing those fish which have expired. They also monitor the water flow through the hatchery thus keeping it a constant volume. They do not interact much or at all with visitors and do not help maintain the grounds unless they are assigned to by the boss or at the request of a host. A Fish Gal, Ann, is occasionally assigned to help our landscape/caretaker boss Hugh. It’s obvious she likes gardening as she does a great job.

So that leaves the volunteers. Two teams of volunteers, Jim with Connie and Jil with myself arrived in the late morning on the First, the previous hosts having left. Fish Guy Patrick lets us into the office to pick up our keys to the hatchery and our host books. The host books have a work log and a plethora of information within, including the all-important emergency numbers and procedures. As we watch the hordes of visitors walking the grounds we hurriedly set up our campsites to be functional so that we could go right to work. We’ll finish setting up for a two month stay a little later.

Our daily sometimes mundane but necessary chores include policing the grounds for wayward paper products, i.e. trash and the ever present cigarette butts in the parking area, dumping trash cans, mowing lawns, caring for flowering plants, watering planters, maintaining brochure stations, and interacting with visitors. We also feed the sturgeon a diet of whole (for Herman) and cut up jack salmon once a week, blow leaves from paths and walks, clean decorative pools, jeez, name it and we do it. We just can’t operate heavy equipment with a State Of Oregon Operators Certificate.

We also help with the not so mundane. Sometimes there’s a big project limbing trees where we can assist. Sometimes like now a Japanese Maple has outgrown it’s planter so Jim was asked to build a larger one. Twice a year- once in the spring and once in the fall salmon return to the hatchery, a.ka. the Spring and Fall Runs, from their time in the ocean. A small percentage of the returning fish are natives, not hatchery raised so they a separated and returned to the Columbia River. A percentage of the returning fish become the spawning fish, the rest are purchased by a buyer.

The Fish Guys and Gals sometimes need some help separating the incoming salmon, also with spawning, i.e. removing the eggs from the ripe females and fertilizing those eggs with milt from male fish. Help is sometimes required to clean and polish Herman The Sturgeons big picture window- inside and out. The water level in the pond is lowered and four or five folks jump in clad in waders and armed with special non-scratch cleaning pads to remove the built up algae. Sometimes the plexiglass window is polished inside and out with the aid of a polishing machine and a fine cut polish, then wiped clean with rags.

The most significant event of 2017 was the Eagle Creek Wildland Fire. The fire was started by a kid that was launching fireworks off a rock outcropping up on a trail near Eagle Creek on September 2, 2017. He saw a small fire start from the location where he had thrown fireworks but didn’t report it. The fire grew to over 48,000 acres the first couple of days seemed manageable until rapidly spread by strong east winds. The fire even spotted across the gorge to Archer Mountain in Washington State. The visitors center in Multnomah Falls was threatened but fireman did a great job of saving it. That’s a distance of 10 miles from the seat of the fire and that’s about as far as the fire traveled to the west. Part of the town of Cascade Locks was under mandatory evacuation orders.

Early on, Jim contacted me, explained the fire situation, added that a fire captain he had spoken to felt that there was no need to evacuate, and asked this retired fireman his opinion. I explained that if I were me I’d make my camp and rolling stock ready to roll within a half hour all the while vigilantly monitoring the fire situation via news media, updates from first responders but most of all keeping a wary eye on the fire activity. The next thing I heard from Jim is that a half hour after my reply the wind came up, the fire blew up and Jim and Connie were ordered to evacuate! He said that burning embers were falling on the hatchery grounds. Some of the embers were actually small tree branches………

The entire Bonneville Hatchery, volunteers and Fish Guys alike as well as the volunteers at the nearby Bonneville Dam were evacuated to the Skamania Fairgrounds in Stevenson WA. Only skeleton crews were permitted to work at the hatchery in order to try and save the historically significant buildings and to save the hatchery fish. Most of the hatchery fish were moved or released. Interstate 84 was closed, so the only way to the hatchery was over the dam which a requires special permit and clearance from the Feds. The Interstate finally reopened approximately three weeks later after identified hazards such as fallen/teetering rock and 2400 “widow maker” trees were removed. FYI- the kid that started the fire is a minor, was convicted of starting the fire, is accountable for the cost of fighting that fire- to the tune of $11,000,000 smackers! Do ya think that the kid is going to be able to pay that much money back??????

Anyhow, we look forward to catching up with Jim and Connie, even our boss Hugh. We hadn’t seen them for two years. We survived Labor Day Weekend once again and look forward to special projects and even mundane chores.

Our location here at Bonneville Fish Hatchery is Site 2. Drop in and say howdy! 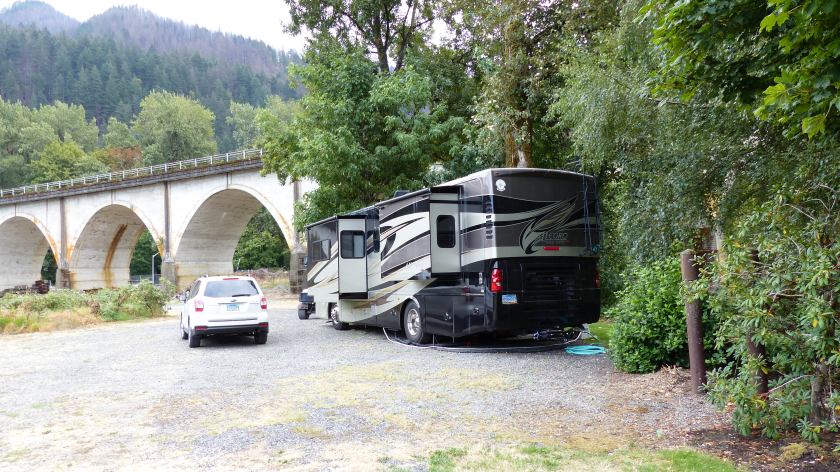